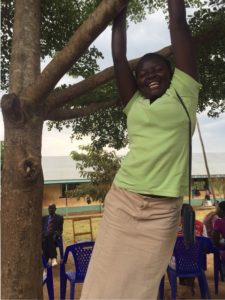 When I first met Esther several weeks ago, her home was the seventh home that we visited in one day. My malaria pill had burnt my esophagus the night before, so I was tired, discouraged, wincing at the thought of another cup of tea. The stories we had encountered already that day were stories of incredible strength, but my heart felt stretched out, like a rubber band pulled too far.

As we approached her house, we turned down aisle of growing maize well above our heads. The light was already turning golden, announcing that our visit needed to be short.

Just as we approached, Esther came running around the side of her house to greet us. She is amazing to see: tall, strong, vibrant, with a smile that breaks apart any fear and takes you in immediately. She ushered us in, come in, come in! She had just been working in the shamba, the garden. She was proud of the maize that towered over us.

We met Esther’s aunt, who exudes a quiet peace. As we sat, the pieces of Esther’s story began to fall together. Esther just finished secondary school last year, and scored so highly that she received direct admission to university for this fall. She is a total orphan who has been supported by the Umoja Project since 2008—throughout the end of her primary school at Bar Union and her entire time in secondary. She attended Mawego Girls’ Boarding School, under Madame Grace, who is a tower of strength for young girls. Esther says that Madame Grace was the one who identified her as a leader among her peers and made her speak in front of others. Grace saw confidence in Esther and made her step into it, and now this confidence exudes from Esther like a gentle light.

We sat with Esther, wishing we could linger. We asked her to describe herself in three words.Hardworking, she said, laughing. Honest. Courageous. She told us that she is looking forward to receiving her calling letter for university, and that she plans to study special education. These people have a unique perspective, she said, and I want to be the one who can listen to them.When we asked what she is excited or nervous about for college, she said she was nervous to make new friends, but excited because her tuition is paid. She feels free to focus on her studies instead of worrying about the fees.

As we talked—about making new friends, about how scary college can be—Esther continued to glow with joy. We asked what she wants to tell younger girls. She told us that she started as a mediocre, shy student, but that an older Umoja girl had told her to start with what she had and work hard to build on that foundation. She wants to tell others that it’s never too late for education, never to be discouraged to start.

We hated to leave. Esther walked with us the mile back to the tarmac, giggling as children chased us and neighboring mamas invited us to marry their sons.

In the next few days, we saw Esther again and again. She helped us plant trees at a neighboring primary school; she encouraged young Umoja students as we visited their homes together. Each time we see her, I can’t help but be encouraged. Not only does her presence lighten whatever grey surrounds, but her story is so hopeful and she is living into that hope with, as she said, hard work, courage, and humility.

Just this week, I got to spend a few days with Esther again. Now, she feels like an old friend—someone I look to for a shared giggle or glance. She’s at the same time a normal 18 year old—nervous about making friends and leaving home—and a wise, old soul. She has faced so much adversity that she is mature beyond her years.

This week, she shared with me that she loves writing. She says it’s how she used to cope with the pain of losing her parents, and now it’s continued as a way of expressing her identity in the world. I asked her if she would ever share her work, and she nodded, yes, with a huge smile. The next day, she pulled me aside to give me a page from her notebook. She told me she had written about the Umoja Project, and that it was ok if I shared the piece with others.

I waited until evening to read what she wrote. Her words confirmed so much that I already know about her: that hers is a story of triumph, that her sensitivity and grace are hard won from all that she has faced. That hope is real, possible, and she testifies to it every day. Here is what she wrote.

I lived in sorrow and fear. I did not even want to associate with my fellow friends because I thought I was nothing before them.

Good Lord! You gave me a father and a mother too! A sister and a brother and that was Umoja Project! Umoja, you have me education which has graduated me from darkness to brightness.

Umoja, you have given me a mother who is GETUP (Girls Empowerment Team of Umoja Project). I am now better than a person who has a mother because not all mothers share what they have experienced with their daughters.

Do you remember where you found me? When my eyes were ever full of tears? When the only thing in my mind was that I am suffering because I am an orphan?

You have taught me to be strong. You have filled the gap in my mind of being parentless. You have fed me just as birds feed their young ones! This is through your lunch program. You have also ensured that I stay at peace by taking me to a boarding school. You have made me to feel a sense of belonging between people by instituting GETUP programs.

Father God, I pray that it may continue so that others can also be helped.

I share Esther’s words with incredible pride. She is incredible, and her story pushes against so many of the narratives of loss we are hearing daily. On Saturday, Esther told a group of Umoja students and local leaders, “I am sure of a bright future.” As always, her presence and confidence were striking. All of us are also sure that her future is bright.

For me, the question still remains—what of the other six home visits we did on that day I first met Esther? What if for every Esther there are six more stories that I can’t tell so easily? But these questions don’t take away from the brightness of Esther’s future, the confident grace of her presence. Her story is one of hope, and it’s worth telling.

Now, it’s the next week. I’ve been to two more schools, six more home visits with Umoja students. None of these stories are Esther’s story: I feel heavy with the weight of bearing witness to these lives.

I’ve met Peter, whose father was so sick he couldn’t shake our hands for the pain. Peter, whose brother is ill, and who has eaten no food except the Umoja school lunch for the last several days. And I’ve met Lavender, who is in last place in her class ranking because she spends her time caring for her two younger sisters when her father disappears. And I’ve met Mercy, who is one of six children supported by one grandmother. When we asked Mercy what she wanted to do when she was older, she said she wanted to work for the Umoja Project so she could help others. Her marks are average, but most likely not high enough to be supported through high school.

These stories don’t slake our hope; they can’t take away from the stories that are delights to tell. But they shouldn’t go untold just because they make us cringe. These stories make us look our inadequacy in the face and ask, what now, what now?

I don’t have answers. I don’t have much at all in the face of all of this. I’ll stay in it, keep listening, keep telling stories. Please stay in it with me.